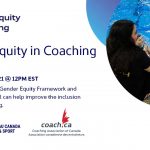 Join us, the Coaching Association of Canada, and our great panel of sport leaders to learn how your organization can help create a more equitable coaching landscape.

Coaches are the most visible and influential leaders in sport. They shape the day-to-day lived experiences of participants and influence the growth and development of sport.

We can’t be what we don’t see. According to a recent study, women athletes who did enter coaching were 4.1X more likely to stay in coaching if they had a woman as a head coach.4 That tells us that representation and role models are integral to retaining women who are already in the field.

This webinar will feature a 40min panel discussion* and a Q&A session for audience members.

Joely Christian is an Antiguan-Canadian university Women’s Volleyball coach at The Royal Military College of Canada. Joely was born and raised in Toronto, Ontario and feels that volleyball inspired her to pursue both volleyball and academics. After a notable youth career competing with Provincial and Junior National team programs, Joely went on to join the Senior National Team directly out of high school. In her second year with the national team, Joely went on to compete for the University of Regina, earning their first and to date only First Team All Canadian selection in addition to helping the team earns it’s first ever berth to the CIS national championships. Joely completed her playing career at the University of Manitoba as conference all-star, All-Canadian Honorable Mention and two bronze medals at the National Championships.

Joely’s philosophy that her athletes should grow as individuals is reflective of the success her players have had in the classroom and on the court with multiple recipients of academic, community and athletic awards over her 14 years as a head coach in USport.

Alex I. McKenzie, MHK is a recent Master of Human Kinetics graduate from the University of Windsor, after having completed his BA (Hons) in Psychology from Western University. Sport, community, and mental health are integral aspects to his professional and academic endeavours. He currently serves on the Board of Directors for the Black Canadian Coaches Association, alongside being a member of the Canadian Sport Psychology Association’s EDI committee. Alex conducts and consults on research projects aimed at addressing inequity in sport and bridging the gaps that exists within the mental health and performance aspects of sport.

Dr. Bettina Callary is the Canada Research Chair in Sport Coaching and Adult Learning and an Associate Professor in the Department of Experiential Studies in Community and Sport at Cape Breton University in Nova Scotia. She researches coach education and development strategies, coach developers, and psychosocial understandings of inclusive coaching (e.g., coaching Masters Athletes, women coaches, Indigenous coaches). She runs the Community Active Sport Training and Learning (CoASTaL) lab. Dr. Callary is the Editor-in-Chief of the International Sport Coaching Journal. She is the co-editor for the books: Coach Education and Development in Sport: Instructional Strategies, and Coaching Masters Athletes: Advancing Research and Practice in Adult Sport, both published by Routledge. She is also an alpine ski coach for the past 20+ years and a coach developer.

Matt Allen is the Chief Innovation Officer with the Professional Golfers’ Association of Canada, overseeing coach education, player development, all special projects coming out of the national office as well as the key contact for the PGA of Canada’s nine zones and other key industry stakeholders both nationally and internationally. He is the Head Coach for the Laurier University Women’s Softball team in Waterloo, has been the Director of Scouting for the Dominican Republic Men’s National Softball Team from 2015-2018 and is the Assistant Coach with the USA Men’s National Softball Team. He sits on a number of sport development committees including the Softball Ontario Coaching Committee, a National Executive Committee member with the Coaching Association of Canada, Golf Canada Sport Development Committee, Co-Chair for You Can Play Canada-East and is the President of the Ontario Intercollegiate Women’s Fastpitch and founding member of the Canadian Collegiate Softball Association. Matt also works with a number of National, Provincial, and Club Sport Organizations on developing diversity and inclusion initiatives, policy development, and strategic direction to make their sport a safe place for all coaches and athletes.