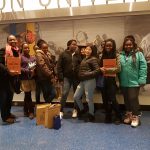 In a male dominated sport like basketball, the senior director of basketball development for Ontario Basketball, Lindsay Walsh, says there are many reasons women drop out of the game.  In the most extreme cases, the environment is sometimes actively exclusionary.  Walsh says as a former athlete and more recently coach and official, she has seen that first-hand.  As a referee, she says she has endured inappropriate comments from parents and coaches.  There is only about one woman for every ten men involved in basketball as referees, and since 2003, the number of women coaches in Ontario has not improved a great deal. It’s about one for every three males, the same as participants.  While the number of boys playing basketball continues to increase, the number of girls has plateaued.  That’s why Walsh says it is crucial they keep as many girls and women as possible from leaving the sport, and that all begins with girls and women better understanding the many pathways available to them when they stop playing.

In 2015, the Ontario Basketball Association hosted an all-girls high school education symposium where 50 high school girls were offered an opportunity to learn from top women in various leadership positions in the sport.   The symposium speakers  included Carly Clarke, the head coach of the Ryerson Women’s Basketball Team who was also an assistant coach with Canada’s National Women’s Team, Michelle Bell, the head athletic therapist at Ryerson, Michelle O’keefe, who at the time was the President and Chief Executive Officer of Canada Basketball, as well as Leisa Washington, who was the first woman WNBA player agent in Canada.

Ontario Basketball hosted the event in partnership with the Ryerson University Women’s Basketball Team and Lady Ballers, an organization which provides summer camps and other opportunities for inner city youth from marginalized communities in the Greater Toronto Area.  The WISE fund grant paid the costs for the 50 high school students to attend the symposium including 25 students who were involved with Lady Ballers.

The young high school participants met industry leaders who shared their stories, challenges as well as the many opportunities available. Lindsay Walsh from Ontario Basketball says, “the feedback we heard from the girls was how important it was to be in the room with their peers as well as to hear from women who are at the forefront of the industry.”  Walsh adds, “It’s important for these young athletes to continue in the game or we’re never going to have representation as coaches, officials and administrators.  They’re going to continue to drop off.”  After the symposium, one of the high school students who participated was offered assistance to upgrade her coaching certification, another was offered assistance with certification as an official.

Walsh says a key lesson for other organizations is to ensure these are not one-off events.  She says the symposium demonstrated how important it is for girls and women to be part of a network of women who understand what it is like to be in this environment and who support one other. They know they are not alone and have others they can turn to for assistance.  “If you don’t feel the organizational support and have the mentorship then eventually the experiences in the environment will contribute to the drop out again.”

Walsh says the symposium helped create more of an organizational awareness within Ontario Basketball of the kinds of ongoing things they need to do to move the needle when it comes to the involvement of women and girls in the sport.   The organization has been working closely with Canadian Women & Sport on other initiatives ever since.

One of the participants who came from the Lady Ballers group was Rachel Ajibolade.  In Grade 10 at the time, she had been playing basketball since she was in Grade 4 but never imagined there were so many career opportunities available in sport.

“It was awesome to see the different types of amazing women doing great in their respective career fields,” she says.  Ajibolade adds, “It just opened doors that I didn’t necessarily know were there.”

Even though it was five years ago, she remembers the symposium like it was yesterday.

“From seeing how this symposium affected the girls that I went with, myself and how we were empowered in both sports and leadership, I think it’s very important to encourage these kinds of things for young girls from an early age and continuing in their young adulthood.”

Sparked by her conversations with the head athletic therapist at Ryerson, Ajibolade became fascinated with sport injuries and saw herself working in the field one day.

She says the symposium had a huge impact on her because she learned about Ryerson as an institution and ultimately it led to her decision to pursue health care.  Now in her second year of nursing at Ryerson, she hopes to get her sport injuries certification after she graduates.  She also remains involved with Lady Ballers as a coach.