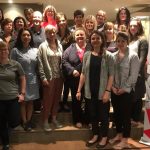 Judo Canada says one of its biggest challenges “is the insufficient involvement of women in the sport, and a low retention of women as staff in the organization.”   Judo is a male dominated sport at every level from participants, to coaches, to Board Directors, to referees.  Since 2002, only 24 per cent of people involved in the sport have been women.

With the help of a WISE Fund grant, in June 2018 Judo Canada invited women from all over the country involved in the sport to attend the first ever Judo Women’s Summit in Montreal.  There were keynote speakers and workshops held to discuss everything from nutrition, to psychological and social factors, and other issues that affect gender equity in the sport.  The chief executive officer of Judo Canada, Nicholas Gill, set the scene by speaking about the current situation and why having more women participating is so important to the organization’s long-term strategy.

A report released after the Summit noted there are many reasons why girls and women drop out of judo when they reach puberty, including the fact that until age 12, judo is a mixed sport for boys and girls in Canada in clubs and in competition. Some young athletes worry about the risk of injury or speak about the difficulty of maintaining weight.  The culture of the sport was also identified as a part of the problem.  Women coaches and referees, who are in the minority, say it can be subtle but sometimes it is difficult garnering respect from some men in the sport.

There were five recommendations that came after the Summit including the need for more intentional targeting of qualified women for promotion, whether as coaches, Board members or in other leadership positions in judo.   Other recommendations include the need for more appropriate training to better equip women to help them break through the glass ceiling and into decision making roles.  The report highlighted as well that men should receive training to support women in those positions.  Enhanced education was also a key recommendation including the need for women athletes to know about the different pathways available when their careers end and a call for a recognition program for inspirational women role models in the sport.  Émilie-Claude Leroux, who is a member of Judo Canada’s women’s committee, says that has been a priority for Judo Canada.  “Our goal is to expose what the women are doing within the judo community – whether it’s our athletes, leaders, or referees.”  She adds, “We have had women’s only camps and had former great athletes coming to camps and going to schools to expose our great role models to the younger generation.”

Participants talked about the importance of having an all-women Summit where they could open up more freely about some of the issues the sport faces.

One of the big takeaways was the goal to have a qualified woman’s coach for the women’s team at the national training centre.  There is a job posting for a position now available for the next Olympic cycle.

After the Summit, one provincial judo association created a women’s committee, and others had fun judo camps for girls.  “A lot of them (provincial sport organizations) were already involved but I think it was maybe more empowering to be a little bit more proactive,” Leroux says.  She adds, sometimes people get overwhelmed because there are so many issues.  But her advice to other organizations is to just start somewhere.  “People were really happy that this dialogue was open, and they had a voice.”

One of the participants at the Summit has been a trailblazer in judo all her life.

Aartje Sheffield has a long history as an athlete and more recently as a coach, referee and President of Judo Ontario.

Sheffield says having an all-women Summit is important to address gender equity in the sport.

“When it’s a female only environment especially in a sport like judo where it’s predominantly male and oftentimes male leaders have strong personalities, this gives women a chance to meet each other and communicate in an open way.”

When Sheffield became president of Judo Ontario six years ago, she was the only provincial president who was a woman.  Now there are a handful of others.  But she says that doesn’t happen by chance.  It has to be intentional.

“You need to lead by example to bring other women in and then if women are doing a good job with their roles then it helps with their acceptance from the men in the sport as well.”

She adds, “Not all men need to be convinced but clearly there are still many who do.”

She says she’s found women are willing to help out and step forward to become leaders.  But her experience has shown they need to be approached differently.

“If you want to increase female participation in leadership positions, you need to find those people and invite them. There’s lots of people who have the skills but think ‘oh no, I couldn’t do it.’  You need to speak to them one on one about what they can bring. Why you want them.”

Sheffield says she received that kind of encouragement herself in the beginning and the sport’s focus on gender equity is helping.

“When I started refereeing, the first tournament I was the only woman referee that day.  Now the last tournament we were in – in Ontario we had almost 50 per cent women.”

And it’s the same for her Board membership at Judo Ontario, where almost half her board is now women.

When trying to change the culture of the sport, she says it is going to take time but Sheffied says she is already noticing big improvements on and off the mat.