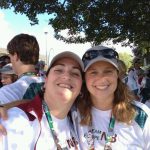 Coach New Brunswick is a not for profit organization dedicated to providing professional development and learning opportunities for coaches at all levels across the province.  This runs the gamut of helping develop coaches at the grass roots and community level to competition coaches who are going to the Canada Games and beyond.  One of the organization’s priorities is to empower more women to become strong role models and leaders within sport.  Coach NB applied for the WISE Fund grant to bring together for the first time ever past recipients of the Women in Coaching Canada Games Apprenticeship program.  This allowed for the most significant evaluation of the program to date.

The Women in Coaching Canada Games Apprenticeship program was established to help build capacity in underrepresented populations in coaching such as women and Indigenous people.  The purpose of the program is to give newer coaches a practical and integrated national multi-sport games experience by teaming them with a mentor coach.

Ashleigh Milani, manager of coach education at Coach NB says, “We felt it was time to re-evaluate how we were doing things to see if the program was achieving what it was meant to and if we, as Coach New Brunswick, were selecting the right candidates and making sure they were being followed through with afterwards.”

In September 2019, Coach New Brunswick held its annual conference in Beresford, in northern New Brunswick.  The event kicked off with a sharing evening where the apprentice coaches, who attended from all over the province thanks to the WISE Fund, took centre stage.  They spoke about their experiences and the key lessons that could be drawn from them. Coach New Brunswick officials weren’t the only ones taking notes.  There were mentors and mentees from some of their other coaching programs on hand.

The majority of the apprentices are still coaching after having terrific experiences with great mentor coaches at the Games and advancing far on their coaching pathway as a result of the program.  This offered proof that the program is working.

However, a couple of the apprentices were frustrated with the way their mentors worked with them and how they became a part of the team.  Milani says they learned sometimes the head coaches who became mentors were selected too late in the process and were unclear about the program guidelines.  Sometimes, the provincial sport organization simply wanted another coach on the team and did not understand how they needed to integrate the apprentice on the team and give them a meaningful role.

Milani says this has had a profound impact on how Coach NB now chooses apprentice coaches.  “A part of our selection criteria now is having the provincial sport organization describe to us who their head coach is, how they see the apprentice coach fitting in, what a meaningful role looks like to them– that being on deck, on field or on ice experience, directly hands on with the athletes – not just sitting on the side of the track and taking splits or keeping stats -having active engaged coaching roles with the athletes.”

Coach NB benefited long-term from this initiative because the mentors and mentees who are part of Coach NB’s other mentorship and advancement programs for women were also in attendance at the annual conference.

Many commented how they couldn’t believe there were other women in the community like them.  Some are in male-dominated sports where they are the only woman coaching at the provincial level or within their community.  They didn’t realize others face similar challenges.

As a result, Coach New Brunswick decided they are not going to wait another 10 years to host a similar conference.  Instead, they are going to bring participants together more frequently so they can have a support network as part of the mentorship program.

Milani says the biggest lesson for other organizations is you do not have to have all the solutions.  You just need to give people a platform  and opportunities to come together.

Melanie Melanson swam for 15 years and just missed going to the Canada Games as an athlete.  After her swim career ended, she became an assistant coach at that same club in Moncton where she swam.

Just before the 2013 Canada Games, she was about to quit coaching, but she was encouraged to apply for the Women in Coaching Canada Games Apprenticeship Program.  She was surprised when she was selected.

Coach New Brunswick helped cover the costs for Melanson to travel to British Columbia to get her level 3 coaching certification, which was a requirement to coach at the Games.

“They paid for everything leading up to it and it’s a significant cost – it’s not something that as an assistant coach making $11 an hour, you’re going to be able to afford to do.”

The Games were an eye opening experience.  She found it both “overwhelming and awesome”. Melanson was given a group of athletes to work with just like the other more experienced coaches.

“It was kind of like being thrown into the deep end a little bit and that’s the best way to learn how to swim.”

That didn’t stop Melanson from being overcome with emotion after an intense couple of weeks and just before the open water swimming event.

“I had no idea what was going on.  It was my first experience with open water,” she says.  Melanson adds, “I just found a tree and had a bit of a cry under it.”

But she says she was lucky she had great support from the other coaches who served as mentors.  After her experience in Sherbrooke, she was chosen to coach at the next Canada Games in Winnipeg.

Now the head coach of the Codiac Vikings Swim Club in Moncton, she leads athletes at all levels and even has one athlete in contention for the Tokyo Olympics.

“The apprenticeship allowed me to take coaching from being a hobby or just something I did part time to something that I’m now doing full-time.  And I have had international opportunities as well.  I was able to coach with Team Canada last summer at the World Junior Championships in Budapest.  So, I have travelled the world and the country and now I get to run my own program. So as far as I’m concerned, it changed my whole life.”

Coach New Brunswick recorded a podcast with Melanson and some of the other apprentice coaches.  You can listen here:   http://coachnb.ca/wic-roundtable/