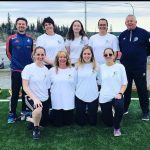 Squash BC was one of the first Canadian organizations to host a Women’s Squash Week trying to encourage more girls and women to try out the sport. They developed a tool kit for the club professionals, who are predominantly men, to help them increase their numbers.  But after two years, the week wasn’t having the desired impact and the number of new women participants had plateaued.   Sue Griffin, the chair of Squash BC’s women and squash committee at the time had a novel idea.  She asked every club pro to identify a woman champion in their location.   That champion would work with the pro to develop specific events during Women’s Squash Week that the participants would find engaging.  Often, they were social evenings with food and prizes and a little squash thrown in for good fun. They encouraged everyone, especially those who had never tried the sport, to take the court and provided all the gear and racquets.  That was phase one of the initiative.  In phase two, which they called “The Emerging Female Leaders in Squash Program”, they looked to retain the 18 new ambassadors as well as the new women the ambassadors were able to bring into the sport during Women’s Squash Week.

The 18 ambassadors were tasked with bringing new women into the sport and into their clubs with fun activities during Women’s Squash Week.  But for these and other women to stay in the sport, Squash BC felt it was also important they see women in leadership positions as role models.  That’s why recognizing the women ambassadors for their commitment to the sport and helping them develop as leaders was another key part of the project. “The WISE Fund was critical in providing a means to recognize and retain these female ambassadors,” Griffin says.  Many of the clubs nominated their ambassadors for two $500 grants that Squash BC offered, with the help of the WISE Fund, to honour two Emerging Leaders in squash.   Squash BC also brought the ambassadors together for a forum in October to enhance their leadership skills and to be part of a panel discussion sharing “lessons from the locker room”.

Squash BC had great success pairing up the female ambassadors with a male pro in each club, who could serve as a mentor and help them develop as leaders.  “The initiative was all about making sure these female champions could stay in sport.  It was also about ensuring new participants could have further opportunities.  It’s been tremendous on both fronts,” Griffin says.  The ambassadors were able to ensure 66 per cent more participation in Women’s Squash Week in 2018, with more than 300 new participants. Many of these new players are still in the game today and many of the ambassadors are continuing to lead programs in their clubs.  Griffin, who has been a CEO of Tennis and the Sports Hall of Fame in BC says the model for what Squash BC was able to do might be interesting for other organizations to replicate.  It went well beyond a one off static event like a women’s squash week to consider a long-term strategy to keep women in the game.  “We had never done anything like this before and it’s never been done in any Provincial Sport Organization here in the province.”

When Squash BC originally considered the initiative, there were people who said it would never work.  Some said they had never done it before, there were costs involved and the clubs wouldn’t get behind it.   “In sport, we need to be able to think like entrepreneurs.  Be creative, take chances, embrace entrepreneurial risk that’s mitigated,” Griffin says.  She adds, “Sometimes we just need to break down the barriers that are self-imposed.  If there is a good idea, explore it, run with it and learn from it.”

Having been raised in a passionate squash family, Rebecca Vassilakakis started playing competitive squash when she was just 10 years old.  As a Junior based in Prince George, she grew her skills and became the provincial junior champion and national junior champion.  Squash has been a lifetime endeavour for her.  Now with three young children, Vassilakakis continues to play and is currently ranked in the top 10 among women in the province.  In addition to playing, she has coached at the Canada Winter Games and is a Board Member at the Nelson Squash Club.

When Squash BC was looking for women to become ambassadors, Vassilakakis made a perfect choice.  She helped host three different events during Women’s Squash Week to promote participation of girls in the sport in Castlegar, Trail and Nelson.  The events were very successful especially at the Nelson Squash Club, where over 20 women who had never played squash before attended.

“The $500 really did help us.  We decided to set aside a few hundred dollars to buy some snacks, drinks and prizes and to make it a good time.  These events have really helped build our base for our women’s squash program.  Over time it has helped grow our membership.  Now they’re part of that whole community.”

Being chosen as one of two winners of Squash BC’s Emerging Female Award and receiving $500 was extra special for Vassilakakis.  It instilled pride for the effort she has been making as a volunteer.  “I’m putting in a lot of time behind the scenes to help grow the club.  So, it was just really nice to be acknowledged by Squash BC and kind of said to me, ‘hey keep doing what you are doing’.”