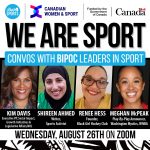 Canadian Women & Sport stands in solidarity with Jacob Blake, Breonna Taylor, Regis Korchinski-Paquet, Ejaz Ahmed Choudry, George Floyd, their families, and the many others whose names we do not know who have experienced anti-Black violence from police and law enforcement. We stand in solidarity with athletes in the WNBPA, NBPA, Hockey Diversity Alliance, NWHLPA, NWSL, and other sports or leagues who are demanding justice for Black people and drawing attention to ongoing anti-Black racism in Canada and the United States.

The conversation during our We Are Sport: Diversity and Leadership panel on August 26 reinforced why a focus on anti-racist action from leaders in sport and elsewhere is critical to ensure justice and an end to the devastating violence of systemic anti-Black racism.

Thank you to Kim Davis, Renee Hess, Megan McPeak, and Shireen Ahmed for holding space for this discussion in a time of sadness and anger. Canadian Women & Sport is grateful to play a supporting role in this project developed by She’s4Sports founder, Ainka Jess.

Watch the panel discussion to learn more, and register for our next panel on mental health on September 23.

Canadian Women & Sport will play an active role in anti-racist work and will continue to work with organizations like She’s 4 Sports to be part of the solution, ensuring that BIPOC women and gender diverse people are centered in the conversation. The goals of the anti-racist and gender equity movements are linked and, in many ways, cannot be achieved separately.

In the words of the panelists:

“When you have a part in sports, you have power. You have a sense of this ability to use your platform – whether you’re an athlete speaking out against police violence, or a media person amplifying black voices, or you’re a fan like me and feeling a need to gather community.” – Renee Hess, Founder, Black Girl Hockey Club

“At the end of the day when athletes take those uniforms off, they are still Black men and women. Why is it on the athletes and the coaches to be the ones to stand up for change? Fans want to look at athletes as if they are not human, as if they are robots. Until Black Lives Matter, all lives do not matter.” – Megan McPeak, Play-by-Play Announcer, Washington Mystics, WNBA

“We need to make sure we’re clear on the definition of allyship. Allyship means you’re willing to put some skin in the game, and willing to lose something to gain something. Not just sitting on the sidelines saying “I support it.”” – Kim Davis, Executive VP, Social Impact, Growth Initiatives, and Legislative Affairs, NHL

“We talk a lot about athlete activism because it’s a cool topic, but at the end of the day, power and privilege rise to the top. Unless the decision makers are impacted personally by anti-blackness or oppression, things won’t change. The same goes for homophobia and islamophobia. Who is sitting at those head tables and making those decisions? Antiblackness and white supremacy will not change until we are shifting in our seats and becoming uncomfortable.” – Shireen Ahmed, Writer, Sports Activist

Canadian Women & Sport is working to develop a new Equity and Inclusion Strategy and Implementation Plan as well as a specific Anti-Black Racism Action Plan and will be sharing this plan with the sport sector for accountability and transparency.