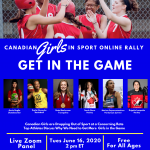 Get in the Game – A Rally for Canadian Girls in Sport

Our latest research shows that sport participation levels for Canadian girls are declining and are especially low among teenagers.

The power of sport to empower girls is undeniable. It helps them push boundaries, build connections, and develop confidence. Sport is an important launching pad as we build the next generation of women leaders.

Join some of Canada’s top sport figures to discuss why we need more Canadian girls In the Game. This live and interactive panel discussion and Q&A will be hosted by Ailish Forfar and feature:

Girls are less likely to get involved and stay involved in sport compared to boys. Rally with us to drive change and build the momentum we need to achieve gender equity. Read our latest research and recommendations for change in The Rally Report.