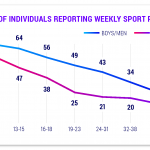 Canadian Girls Are Dropping Out of Sport According to National Study

Canadian Women & Sport, in partnership with Canadian Tire Jumpstart Charities, issued today The Rally Report – a national study on sport participation for Canadian girls aged 6-18.  Research was completed in February 2020 with IMI International.  The study is designed to inform, educate and inspire action across Canada and to drive change to keep girls in sport.

Overall, The Rally Report shows that sport participation levels for Canadian girls are much lower than boys.  Among girls who have participated in sport, there is a dramatic dropout rate observed with 1 in 3 girls leaving sport by late adolescence. By comparison, the dropout rate for teenage boys (aged 16-18) is only 1 in 10.

Sport participation rates for Canadian girls decline steadily from childhood to adolescence with as many as 62% of girls not playing sport at all.

“If we want sport in Canada to reach its full potential, we need girls and women to be involved as participants, leaders and contributors. These declining participation rates, both over time and as girls get older, are troubling and showcase a critical problem that must be addressed,” said Allison Sandmeyer-Graves, CEO, Canadian Women & Sport. “Less girls in sport now translates into less girls and women in leadership roles – in sport and beyond.”

“Jumpstart understands the importance sport and recreation play in a child’s life and we want to ensure that girls, who drop out of sport at a higher rate than boys, have continued access to the activities they love ,” says Scott Fraser, President, Canadian Tire Jumpstart Charities. “We are proud to work with Canadian Women and Sport to help level the playing field and cultivate a stronger future for girls.”

Canadian Girls Are Dropping Out of Sport

Barriers to Sport Participation Among Girls

The full copy of The Rally Report along with suggested actions to drive change and is available here.

Canadian Women & Sport is dedicated to creating an equitable and inclusive Canadian sport and physical activity system that empowers girls and women—as active participants and leaders—within and through sport. With a focus on systemic change, we partner with sport organizations, governments, and leaders to challenge the status quo and build better sport through gender equity.

Canadian Tire Jumpstart Charities is a national charity committed to ensuring kids in need have equal access to sport and recreation. With an extensive, national network of more than 1,000 grantees and 289 local chapters, Jumpstart helps eligible families cover the costs of registration, transportation, and equipment, and provides funding to selected organizations for recreational infrastructure and programming. Supported by the Government of Canada through Sport Canada and the Canadian Tire Family of Companies, Jumpstart has provided more than two million opportunities for Canadian kids to get in the game since 2005. For more information, visit jumpstart.canadiantire.ca.