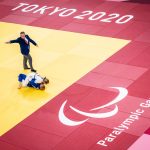 Despite the uncertainties surrounding the Tokyo 2020 Games, Canada’s Olympians walked away with a total of 24 medals: 7 gold, 6 silver and 11 bronze. They set a new national medal record for a non-boycotted Summer Games. Of those 24 medals, Canadian women won 18. Shortly after the Olympics, Canada’s Paralympians won 21 medals: 5 gold, 10 silver and 6 bronze. Women Paralympians took home 11 medals.

Between the medal counts and the inspiring competitions, one thing is clear: women have and continue to dominate the field of play despite barriers to sport.

To celebrate Canadian women’s achievements and highlight some of the inequities they face as part of their Olympic experiences, we’ve mapped the top 10 moments from the Tokyo 2020 Olympics and Paralympics.

Many Paralympic athletes worried a COVID-19 outbreak during the Olympics would sideline their games completely.[26] This isn’t the first time the Paralympics have risked being cancelled due to issues at the Olympics. At the 2016 Paralympic Games in Rio, after facing significant budget cuts, the games were almost cancelled altogether. Thanks to a £56 million government grant, the Games continued at a reduced capacity.[27]

Canadian swimmer Aurélie Rivard took home two gold, one silver and two bronze medals from Tokyo. The Quebec native now holds a total of 10 Paralympic medals. Despite not training for 18 months because of the COVID-19 pandemic, Rivard managed to capture 23% of Canada’s medals at the Paralympic Games and crush her own world record by five seconds!

Paralympians and parasport athletes do not get the same coverage, sponsorship or recognition opportunities as Olympic athletes. According to a survey done in 2016, only 52% of Canadians were familiar with the Paralympic Games.[24] For the average viewer, the Paralympics are the only opportunity to see these sport and athletes. While there is a way to go to secure more coverage, this year a record number of 200 hours were dedicated to the Paralympics across TV and livestream platforms on CBC/Radio-Canada, AMI, and Sportsnet, and digital partners Twitter, Facebook, and MXZN.[25]

Pregnancy, post-partum, and breastfeeding became hot-topic barriers to women in sport this Olympics. Highly ranked Canadian boxer Mandy Bujold was originally not eligible to compete in Tokyo 2020 due to missing qualification criteria because of her pregnancy. [21] Bujold went on to contest this in court and won. The court ruled that the International Olympic Boxing Task Force’s qualification decisions must include an accommodation for women who were pregnant or post-partum during the qualification period. This historic win for Bujold was a big leap forward for women and gender equity in sport. Bujold wasn’t the only mom fighting for rights during the Games. Canadian basketball player, Kim Gaucher, also played a big role in advocating for gender equity after she convinced the IOC to allow breastfeeding people to bring their children to Tokyo, despite a no spectator/family member rule due to COVID-19.[22]

Pregnancy and barrier to sport participation

Both Bujold’s and Gacuhers’ stories illustrate that simply allowing and creating space for women to participate in sport isn’t enough. Women face a long list of barriers to sport. It’s vital that the top sporting committees of the world leverage a gender lens in designing policies for international competition.

Canada’s Women’s Softball team’s win marked the country’s first medal in the sport. With Canada as one of four countries to qualify for all five Olympic tournaments along with Japan, the U.S. and Australia, it’s no surprise that the team was a medal favourite.[18]

Data from the Tokyo Olympics shows that only 13% of coaches and 30.5% of technical officials identified as women.2 While having a gendered-balanced games is important for gender equity in sport, so too is having more women in coaching and leadership positions. Congratulations to Team Canada’s softball team where women represented 50% of four person coaching staff for the Tokyo 2020 Olympics.[3]

The 21-year-old Toronto native took home bronze in the women’s T64 100m dash despite a recent string of injuries. In the semi-final, Papaconstantinou beat her personal best with a time of 59.98, then went on to capture bronze in the finals.

Only 4% of sport media coverage outside the Olympic timetable is dedicated to women’s sports.1 It is even less for parasport. When there is no supply, it’s hard to cultivate demand. With the recent successes we’re seeing across women’s sports and competitions, the onus is on media corporations to actively promote, deliver and champion women’s sport in Canada, not just every two years for the Olympic and Paralympic Games.

5. Olympians and Paralympians dominate in judo

Three Canadian judo athletes won medals in 2020: Jessica Klimkait, bronze in the 57kg event; Catherine Beauchemin-Pinard, bronze in the under-63kg event; and Paralympic flag-bearer Priscilla Gagné who became the first Canadian woman to win a medal in Para judo, taking home the silver in the 52kg event. Judo has undoubtedly been put on the map thanks to these women’s dominance in Tokyo.

Women athletes, including those in judo, face many forms of sexism at the Olympics

According to the #RespectHerGame report on the coverage of the Tokyo summer Olympics women athletes are:

Prior to Tokyo 2020, canoe was an exclusively male discipline.[13] Women’s canoe pair Vincent and Vincent-Lapointe won bronze in the C-2 500 metres final, marking the debut of women’s canoe at the Olympics Games[14].

Canoeing was officially inducted at the Berlin Games in 1936[15]. 84 years later, women finally have access to compete in canoeing at the Olympic level. Thanks to the efforts of many women trailblazers and allies who have long advocated for women to perform at the Olympics, this shift demonstrates that with enough voices, change can happen.

The Tokyo 2020 Olympic and Paralympic Games marked a record number of out 2SLGBTQ+ athletes with 185[9] Olympians and 28[10] Paralympians. Women’s Soccer midfielder Quinn became the first transgender, non-binary athlete to win an Olympic medal.[11] For young transgender, non-binary youth looking to participate in sport, Quinn is an example of what is possible.

There is still much debate within the Canadian and International sport systems about regulations for trans and non-binary athletes. From grassroots to high-performance, many sports are still grappling with how to integrate these athletes. At the Tokyo 2020 games, for example, World Athletics regulations barred 800-metre South African runner Caster Semenya from competing due to what they call Differences in Sexual Development (DSD)[12].

*Consistent with existing human rights legislation and Canadian Women & Sport’s ongoing commitment to achieving equity for girls and women, Canadian Women & Sport supports the full participation of all individuals in sport and physical activity in the gender in which they identify. To learn more read our Position Statement: Trans Inclusion in Sport.

Claiming a spot on the podium in three swimming events in Tokyo, Penny Oleksiak earned her seventh Olympic medal. With 3.12 million people watching the final 100m of the women’s 4x100m medley relay, Oleksiak anchored the Canadian team to a bronze medal, solidifying her place in Canadian sporting history as the most decorated summer Olympian ever.[3] This race was also the second most-watched event during the Olympics.

Swimmers and women still face discrimination for what they wear

Soul Cap, an extra-large swimming cap created for swimmers who struggle with their hair[4], was banned from the Tokyo 2020 Games. According to the International Swimming Federation, the caps do not fit “the natural form of the head.”[5] Not only does this affect high-performance athletes and contribute to the exclusion of diversity in the sport, but according to Chantique Carey-Payne, Head Coach of the University of Guelph’s Swimming team, it will affect Canadian swimmers as young as 10-years-old in competitions.[6]

From the nail-bitingly good gold medal game, to the years of hard work and effort leading to this moment, Canada’s Women’s Soccer Teams’ win was arguably one of the games’ most exciting events. After two bronze place finishes in the London 2012 and Rio 2016 Games, Canada was hungry for gold in 2020. Also with this win, Canada’s Christine Sinclair, the greatest international goal scorer all of time, was finally able to add a gold medal to her legendary career.No professional league in Canada

Currently there is no professional soccer league in Canada for women to play year-round.

Sixteen of the 18 players on the 2020 Olympic roster play professionally overseas.[1] With over 4.4 million people tuning into the gold medal match[2], there is arguably both the interest and the audience to watch the best women in the world play domestically year-round.